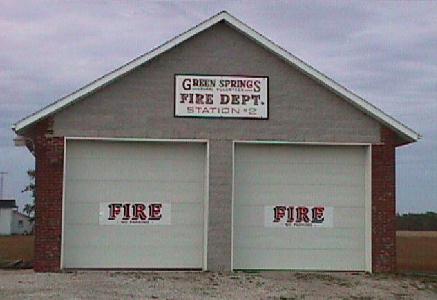 This station began it's life as a one-room schoolhouse, one mile from the east border of Adams Township. Now privately owned, the department holds a 30 yr. lease with the owner, for $100/yr plus property taxes. When the department first checked into the building, in lieu of decreasing response time in that area of jurisdiction, it was not in the best of shape, but the main structure and foundation were salvageable. With the exception of masonry work done to the front of the building, and at the windows and man doors, all of the work was completed by department members.


In May of 1991, construction began with the hauling out of junk stored in the building, then tearing the wooden floor out as well. Next the contractors went to work on completely redoing the front of the building to accomodate 2 12' X 12' overhead doors, installing 2 man doors in the east and west sides of the building, and reducing the 6 window openings' size and installing new window blocks. When that work was complete the department went back to work, starting next with completely removing the old roofing and re-sheeting and shingling the roof, including new soffit and fascia wrapping. A septic system, floor drainage, and other plumbing were installed next to be followed by pouring the new concrete floor throughout the building.


Interior construction started next as 2x4 walls were built inside the brick walls from floor to ceiling, including the construction of a restroom in one corner of the building. Wiring, plumbing, and insulation were followed by the hanging of dry-wall on all the walls and ceiling. A coat of texture finish to the ceiling, and paint on the walls, left the detailing of woodwork and turnout gear racks and the sort all that remained on the inside of the station. The station was ready to go, by the scheduled date of May 1992, and at a cost of approx. $25,000 for renovation, was close to budget also.


During the summer the outside work continued, as the yard was leveled off and seeded, the parking lot leveled and stone hauled in, a flagpole erected, and landscaping to the lot gave the station a final touch. The station was completely finished by May of 1993 with grass growing and firemen responding.


The 10 station 2 recruits had been through training and were responding to firecalls by the end of 1992, with the first truck (Engine #8) being placed at the station on May 1, 1993. Tanker 9 was placed into service in the fall of 1993 (upon it's completion, by department members), and the station was at full operation at that time with 12 firemen, an engine and a tanker.


Station #2 was officially dedicated on Sept. 18, 1994 with an openhouse and ceremony at the station. The Green Springs town band provided the entertainment while the visitors ate roast hog as the main course of food for the day. The American Legion Post 295 performed the flag raising ceremony, and speeches were givin by the Fire Chief: Elwell Oakleaf, Asst. Chief: Todd Knieriemen, Station 2 Lieutenant: Dennis Riegel, Mayor of Green Springs: Fred Audritsh and other dignitaries. A ribbon cutting, by all of the station 2 members, capped off the formal events of the day.


Station #2 has met the expectations of it's founding by greatly reducing response time to Adams Twp. residents. The station is 9 miles southeast of station #1, greatly decreasing response time to the southeast corner of the GSFD coverage area. Both stations respond to all firecalls and receive instruction from first on-scene units as to response status. Final project total cost was approx. $110,000 Including: Renovation,Tanker #9, Turnout gear, and Pagers.