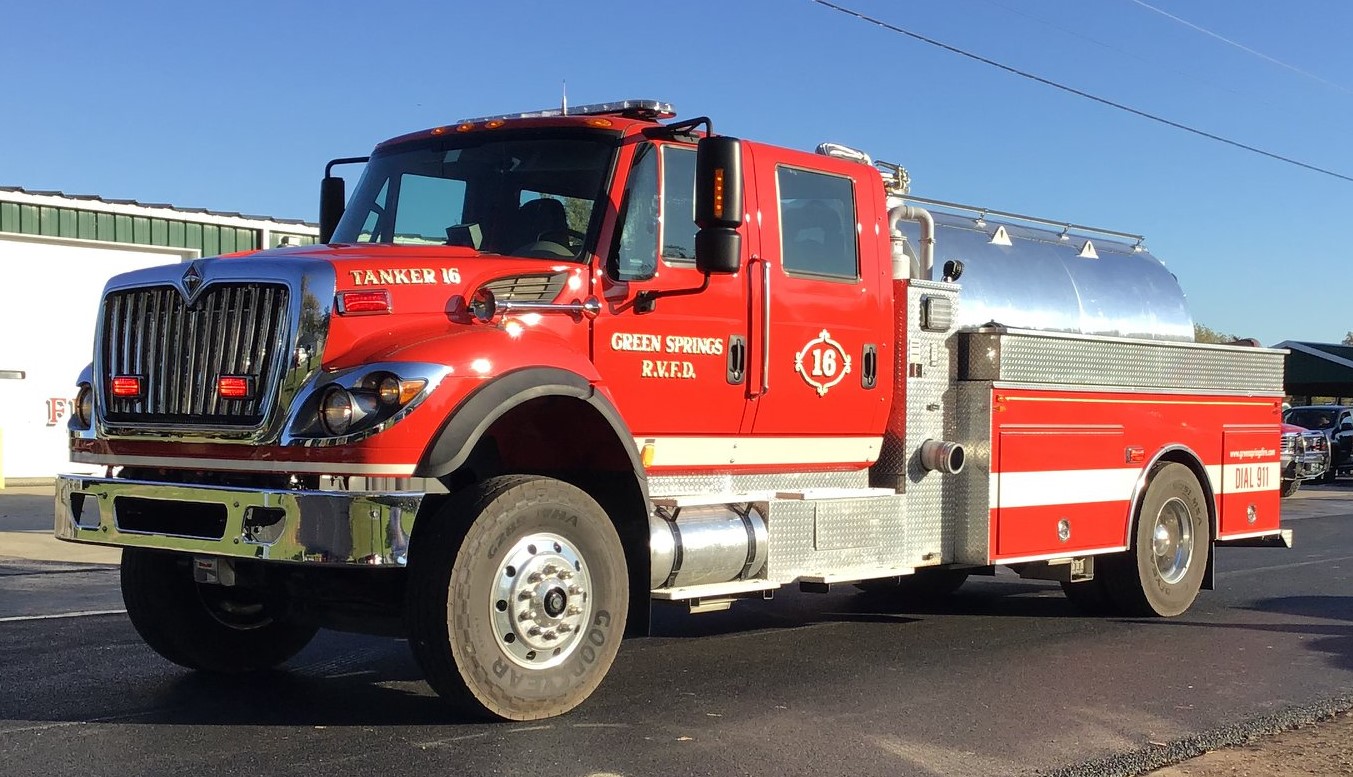 The rear of the truck has a rescue body that is 100' wide. The rear is equipped with Rom roll up doors and Rom track lighting inside of the cabinetry. The cabinetry is 26" deep with a zilatone finish. In side of the cabinetry on the drivers side of the truck is all of the tools used in firefighting. The front most compartment contains all of the fittings that are need for hose connections. The controls for the trucks light tower and electrical systems is also located in this compartment. The second compartment has two vertical tool boards and three fixed horizontal shelves. All of the hand tools are located in this compartment along with an Akron 100gmp water monitor with a straight stream nozzle and a combination nozzle. The third compartment holds our high rise hose and hand tools for use in building equipped with sprinkler systems. The fourth compartment holds our saws, fans, and misc. items.

The rear of the truck has two compartments. The top compartment hold a 24' extension ladder, a 14' roof ladder, a collapsible attic ladder, two sections of 6" hard suction, three pike poles and a back board. The bottom compartment holds our hydraulic rescue tools. the rescue tools are all Genesis brand and include a set of spreaders, a set of cutters, and a ram tool. The tools are preconnected through two hose reels with 100' of hose to a out law hydraulic pump that is powered by a Honda engine. At the top of the rear of the truck there is also access to the hose bed. The hose bed holds 1000' of 4" supply hose and 600' of 3" hose. The hose bed is covered by two diamond plate doors to make the entire top of the truck a walkable surface. The rear of the truck is also equipped with a Zico ladder to allow easy access to the top of the truck.

The passenger side of the truck is also equipped with for large compartments on the rescue body. In the front compartment is a fill station used to refill SCBA bottles. The fill station is attached to 4 6000 psi bottles that are located in the bottom of compartment on the top of the truck. In the second compartment there is a norcold refrigerator that is used to hold water for firefighters to drink while on fire scenes. Also in this compartment extra air bottles are stored as well as a small tool box. In the third compartment we store our air bags for rescue application and cribbing. The fourth compartment holds other tools that are used for motor vehicle extrication such s come-a-longs, saws for removing glass, air tools, and extra hoses and an extra hydraulic pump for tools. Also in this compartment there are electric reels. Coming down in top of the compartment there also in a 100' air reel that is attached to the trucks air system and a 100' electric reel that is powered off of the generator.

The cab of the truck hold 8 fire fighters and 7 SCBAs that are mounted in SCBA seats. In a compartment that is located on the rear wall of the cab the ice rescue suits that department used are stored along with helmets and ropes. Also stored in the cab are 6 portable radios and chargers. In small compartments on the side of the cab we have stored our AED and medical bags. The cab is equipped with a federal Q siren, A whelen 100 watt siren, two air horms, and a Kenwood radio.

Brush 14 was placed in service at Station #2 in September 2007. This truck was put together by the members of the Green Springs Fire Department. A new Skid unit was purchased and placed into the rear of the truck after the bed was rhino lined. The skid unit has 200 Feet of 1" Niedner booster reel hose mounted on reel on top of the 225 gallon poly tank. It has a CET 18 Hp Honda pump, and 150 feet of pre-connected 1 1/2" Cotton hose. The Members of the department plumbed two spray nozzles to the front bumper for spraying water in front of the truck. There is a 6 Foot section of 1" Niedner hose also attached to the rear of the truck for use in field fires. The rear of the truck was equipped with a 2' platform for firefighter to stand on while fighting field fires. There is a stainless steel railing all around the rear platform for the safety of the firefighters. Stainless nerf-style bars were added to the sides of the truck as well as a stainless brush guard on the front. The tires and wheels were replaced with aggressive tread tires and stainless wheels.

The inside of the truck was also modified to make it better suited for firefighting. The rear seat was removed and Bostrum Air pack seats were installed. These seats hold two Scott air packs for firefighters to wear in the event of smoke condition both while fighting interior fires or field fires. The center console that came with the truck was removed and placed into the rear of the truck between the two air pack seats in the rear. A new center console was manufactured by department members. The center console holds the controls for the light bar, the controls for the front spray nozzles, the radio used for communications, siren driver, a rechargeable fire hawk flashlight and a portable radio that is equipped with a two muff head set that allows the firefighter on the rear of the truck to communicate with the driver of the fire truck .

The existing skid unit that was removed from Brush #6 was 3 years old at the time this new truck was assembled. The skid unit is equipped with a Hale 250 GPM pump that is plumbed to a 200 gallon poly tank. There is 200 feet of lightweight 3/4" booster line with a 1/4" straight bore nozzle connected to a new light-weight hose reel. There is also a 6' 3/4" line with 1/4" straight bore nozzle on the rear platform. In a non-preconnected cross-lay there is 50' of 2 1/2" hose for filling, and a 50' section of 1 1/2" hose. On the front brush guard there are 2 agricultural type spray nozzles that are cab controlled. These nozzles are controlled independently via electric solenoids and can be operated individually or at same time.

Additions installed were the front brush guard, side nerf-bar style steps, polished alluminum wheels & aggressive tread mudder radial tires, Rhino liner in the truck bed, and a Fire-Com head-set sytem for communications between the Apparatus driver and the rear operator.

Many items were designed and constructed by dept. members, including the roll-bar for mounting of the lightbar and radio antennas, the rear platform style bumper, the stainless steel hand rails and rear platform enclosure, the new control box and panel for operating the pump and it's accessories, the cross-lay tray, the hard suction hose tray, the portable water extinguisher tray,and the nozzle mounts for the 2 front spray nozzles.

There were alot of people involved in this project and all the help was greatly appreciated and the dept. now has another fine unit in it's fleet to be proud of. This truck was funded soley by monies raised by the dept. at fund raisers. Thanks to all of our supporters for their support over the years. They are the ones who made this project possible.

Tanker 12 is a 2100 gallon vaccuum tanker that was placed into service in May of 2001. It is the second truck of it's kind that the department now has in it's fleet. (see tanker 9 also) This truck, unique for fire-service water hauling, at the time, is the same type truck that is used for pumping out septic tanks, etc... With its 6" rear suction/dump, and 6" side suctions/dumps, it can be filled or dumped in right around 2 minutes, depending on length of suction hoses, and doesn't require a pumper to do the filling. The large vaccuum pump works to fill the tank in the same manner that a primer pump on a centrifigal fire pump displaces air in the pump cavity to allow water to be pushed into it by atmospheric pressure. When the truck reaches the scene, the vaccuum pump is run in reverse to actually pressurize the tank and help push the water out, rather than just gravity feed. It can be used as a conventional tanker, requiring a pressurized water source to fill it, and gravity dumping, by opening a vent/bleeder valve.

Differences between this truck and tanker 9 are few. Tanker 12's chassis was purchased new and then sent to Firovac in Applecreek, OH to have the remainder of the truck assembled. The tank is steel. but all cabinetry is aluminum. The side dumps on tanker 12 are air operated from the cab rather than manual valves. The rear dump is a manual 6" full flow gate valve. The tank vent/bleeder is also air actuated from the cab as well.

Tanker 9 was built by the department in 1990 to be placed in service at station 2. It is equipped with a 8.2 litre Detroit Diesel engine, Allison automatic tranny, air brakes,and 11R24.5 radial tires. It is a 2,100 gallon vaccuum tanker that was built on a 1986 GMC chassis. This truck, unique for fire-service water hauling, at the time, is the same type truck that is used for pumping out septic tanks, etc... With its 8" rear suction/dump, and 6" side suctions/dumps, it can be filled or dumped in right around 2 minutes, depending on length of suction hoses, and doesn't require a pumper to do the filling. The large vaccuum pump works to fill the tank in the same manner that a primer pump on a centrifigal fire pump displaces air in the pump cavity to allow water to be pushed into it by atmospheric pressure. When the truck reaches the scene, the vaccuum pump is run in reverse to actually pressurize the tank and help push the water out, rather than just gravity feed. It can be used as a conventional tanker, requiring a pressurized water source to fill it, and gravity dumping, by opening a vent/bleeder valve that attatches to the top of the tank.

The chassis was purchased used from a dealer and taken to the tank manufacturer, where the tank and vaccuum system was installed. From there the truck was taken to a local sheet metal shop where the alluminum cabinetry and compartmentation was added to the truck. Then to a shop of one of the firemen to be painted. The radios, emergency lighting, sirens, air horns, and tail/marker lighting were installed at the station. Most of the adapters were fabricated by firemen from fittings that were found at the station. The clear suction hoses were assembled at the station also. The portable water tanks (of which 3 were built) were also built in house with materials donated by local businesses, and the tarp portions being purchased locally from a tarp manufacturer. Finally, the authentic goldleaf striping and lettering were applied, by a local sign maker, by hand.

The vaccuum tanker has proved itself to be very effective in our rural water supply operations, and there are several other departments in the area that are now using them also.